Britain's MR SAFETY a.k.a. Jason Conrad breaks silence to celebrate the continued success of his international legendary Road Safety THINK! and Stay Alive Campaign, (est. 1972) and applauds the governments continued and diversified use of his brainchild and legacy, which he started 40 years ago; spanning 5 decades.

The "THINK!" slogan originated and was established by Jason Conrad a.k.a. MR SAFETY in 1972, and was officially launched in the famous 'THINK! AND STAY ALIVE SHOWS' (and CRESTA BEAR SHOW) in 1974. After success in America (1987-1995) upon his return to the United Kingdom (21 years after its inception), he contacted Tony Blair and suggested he adopt the internationally successful THINK! slogan. A masterstroke by Prime Minister Tony Blair it was adopted, he and the government are to be commended on their ingenuity, foresight and commitment on this NOW multi-diverse THINK! program.

The department for transport continues through TV, radio, cinema, motorways and online advertising to impress the message of road safety upon us all.

According to a former president of the A.S.S.E. (American Society of Safety Engineers – July 1989, to which Jason was the first international member), stated the “THINK! Safety Campaign was the most successful safety campaign, worldwide, ever.” (And now the longest).

The ongoing campaign undoubtedly continues to save the lives of people of all ages through the message THINK! Indeed an acknowledgment and a tribute to the Mr Safety campaign. Despite the national recognition and the campaign however, today little is known of its originator. Once hailed as an 'international hero', Mr Safety a.k.a. Jason Conrad now resides in the UK. 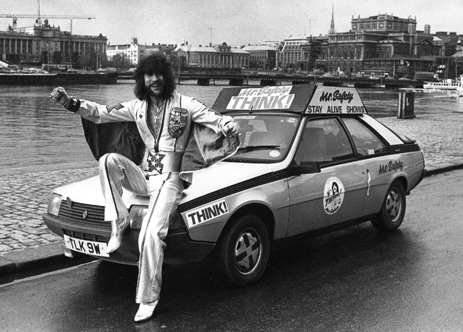 The original THINK! Campaign was launched by Jason Conrad in 1972 following a year of research into road safety in partnership with the police, road safety officers, ROSPA and the British Safety Council. Jason went on to create the 'THINK! And Stay Alive Show' which enjoyed its first tour in Derby schools in April 1974. Jason was the original Green Cross Code Man, taking the vital message of road safety on tour to children across the country, and was eventually dubbed ‘Mr Safety’ by the media.

Mr Safety's success was also the inspiration behind the governments Green Cross Man TV campaign in the late 1970s, being invited to top level meetings C.O.I. and D.O.E., although the campaign was somewhat controversial according to some road safety experts.

Growing up in London during the Blitz, Jason survived a close call when an incendiary bomb landed on a house across the street. Always a flamboyant character, by a twist of fate and his uncanny likeness to Jason King, went on to do modelling work. He then progressed to Drama School and found his niche in Repertory Theatre and some TV in which he gained full equity status.

However, on advice from legendary singer and dear friend Frankie Laine to 'follow his heart', and after witnessing a tragic accident involving a young 6 year old child, Jason decided to research child safety education. Fate intervened and without the invaluable help, love and support of his former wife and chosen adopted daughter, Mr Safety may never have been born. At this time, the government had launched a series of safety campaigns, some of which had not been completely successful. Jason realised that his passion, talent and experience could be put to good use to promote the message of road safety, and thus began his lifelong devotion for promoting THINK!

From its early developments in Derbyshire, Jason's work for child safety quickly became recognised by various headlines, both nationally and internationally. Mr Safety, the vulnerable hero, was an effective means of promoting the THINK! message. Unlike characters of other campaigns, Mr Safety also had to THINK! to stay alive, and quickly became the champion of child safety, a modern day silver knight crusader, the children's advocate and hero of the children. He was also the first and only megastar of child safety. 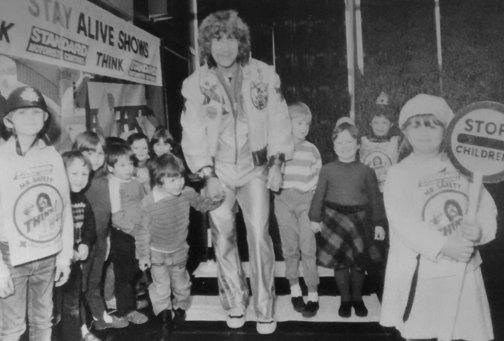 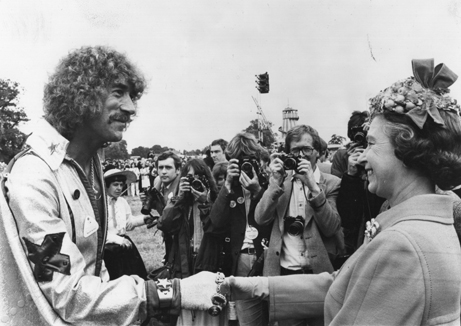 'The THINK! and Stay Alive Show’ which featured the loved green haired Miss Thinky (GREEN FOR THE GREEN CROSS CODE), an interactive, captivating and entertaining show toured to thousands of schools, hospitals and public events across the country, delivering its vital message wherever it went. The song 'The New Revolution THINK’ first recorded in 1975 was a high point of the show.

A head teacher in 1975 commented: "Children respond far better when told to do things rather than not to do things, and it was very clever the way you got the message across. Seeing the children leaving school I can almost see "THINK!" standing out on their foreheads".

Jason became an envoy to Lady Soames president of the International Year of the Child in 1979 and daughter of Sir Winston Churchill, furthering the national recognition of his work. Jason gained sponsorship through Schweppes, Matchbox Toys and Honda (to name a few), allowing him to continue his work at no cost to the taxpayer.

In America, Jason founded the Children's Safety Foundation inc., based in central Florida continuing his work 'teaching children to THINK! to stay alive'.

Mr Safety introduced the Green Cross Code and his THINK! campaign to America, along with his Blue Cross for water safety, Red Cross for fire safety and Yellow Cross for drug awareness. Jason became an international member of the National Safety Council and The Variety Club, amongst others, and was invited to sit on the executive committee of the 1994 World Cup by Mayor Glenda Hood, combining his celebrity status with is lifelong love of football to help with the arrangements for World Cup matches.

Mr Safety's final show in America took place in 1995 at the Shamu Stadium in Sea World, Florida, by which time the THINK! message had become an internationally recognised, and more importantly an effective safety campaign. Children from all over the world took the THINK! message home. Jason has since returned to the UK and though disability resulted in early retirement from Mr Safety, still Jason remains keen to help promote THINK!

Jason was able to use his celebrity status for considerable charitable work, becoming Honorary Vice President of PHAB (Physically handicapped and able bodied- a national charity encouraging people with and without physical disabilities to come together on equal terms).

Other numerous diverse charitable work includes fundraising for The Heart Foundation and Cancer Research, for which Jason was personally presented and commended by HM The Queen (1981).

The name 'Mr Safety' was given by the media in 1975 in recognition of his safety code system. In an international press release by Walt Disney Productions UK in 1978, Jason was elevated to the title of "Britain's Mr Safety".

His international recognition saw Jason invited to Stockholm in 1982 to share his safety education knowledge with ministerial parliament, and eventually being personally invited from legendary and friend Frankie Laine, Jason took up residence in America in 1987, soon after his narrow escape in the great fire at Bingley Hall exhibition centre, Birmingham, in 1986. 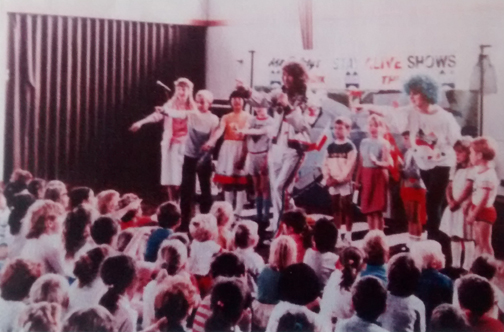 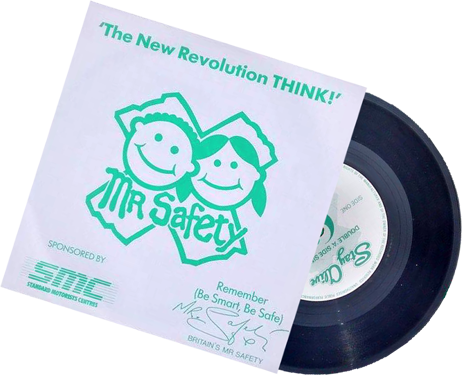 Today Jason translates his life experiences into songs under his own label 'Beyond a Dream' which he writes from his home in the UK, however Mr Safety is never far from his thoughts: "It is fantastic to see the THINK! campaign which I started over 5 decades ago and which is still going strong today. The safety of a child is paramount; it takes one second to be safe or sorry, so to stay safe you must THINK!" - Jason Conrad (1972)

"I am very proud that my legacy lives on"

In a letter from Buckingham Palace (2003) The Princess Royal commended Jason on his THINK! Campaign, which is quite remarkable considering is was 25 years earlier in 1982 at a Royal Tea Party supporting PHAB, when the Princess first congratulated Jason on his philosophy of teaching children to THINK! before action, any action.

In 1979, Dame Lady Soames M.B.E. (daughter of Sir Winston Churchill) stated that: "Mr Safety is magnificent and an inspiration, a wonderful ambassador for us all at International Year of the Child". 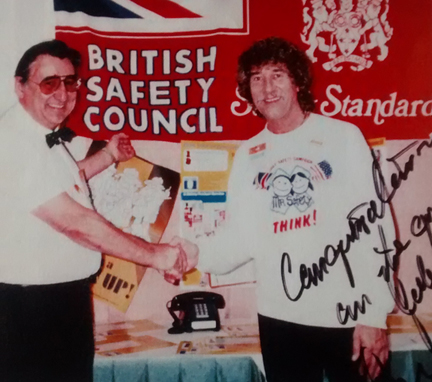 Furthermore, Jason was commended by James Tye, Director General of the British Safety Council in a personal letter (1977) which stated: "We know that the retention value of this kind of education is vastly higher than any other method. There is no doubt that Mr Conrad's activities have saved many lives already..."

Mr Safety's support also did not fall short with the numerous celebrities. Following the input of the government, it is with great appreciation that the revelation, which is Mr Safety, who started a revolution 40 years ago, spanning over 5 decades is still an enormous inspiration.

The government should be proud of the continued success of the THINK programs. Mr Safety is proud that his brainchild and LEGACY lives on.

Fig 1.3 - At a primary school in Yorkshire

Fig 1.4 - Fundraising with the Queen at Great Windsor Park

Fig 1.6 - At a safety convention in Florida with James Tye