"MR SAFETY" - Jason Conrad - the most well-established and highly respected child safety figure in Britain who has been conducting his "Stay Alive" show for 14 years, was a popular visitor to Barry Island Junior School.

This year Jason will be presenting hundreds of shows at schools, hospitals, stores and in city centres thanks to the support of the Luton-based car accessory giants Standard Motorists Centres.

Jason decided to forego an acting career for the cause of child safety after witnessing a tragic accident in which a young child was killed.

He originated the now famous Green Cross Code for road safety and introduced, during his campaigning at over 6,000 schools, the Blue Cross Code and Red Cross Code for water and home safety respectively.

As well as entertaining - and educating - over three million children he has also starred at many public events and the ultimate accolade came in 1981 when he was personally presented to H. M. The Queen when in the running of PHAB - the physically handicapped and able bodied association.

The 'Stay Alive' shows are the result of extensive research into the cause of accidents and continuing consultation with various police forces, safety officers abd official safety organisations like the British Safety Council. The show relies for its impact and memorability on an entertaining educational 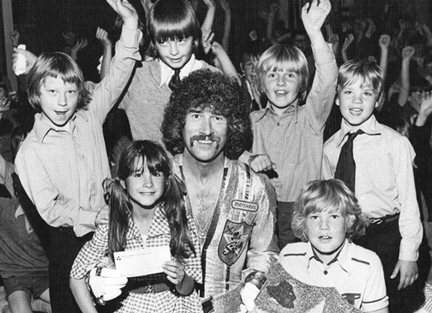 method based upon the proven formula of teaching while having fun. Labelled as 'the foremost method of child safety education in the country,' the British Safety Council, the country's largest safety organisation, confirmed; "His methods of participation fall exactly in line with training techniques used by the Council. We know that the retention value of this kind of education is vastly higher than any other technique."

The theme of the show is based upon the premise that lives cannot be saved by the sudden, or magical, appearance or a robot, Superman or cartoon character. Through providing an aura of a Superstar, "Mr Safety" convinces his audience that he is, like them, only human and, therefore, destructible.

He always opens his show by immediately involving his audience, asking them what they would like to be when they grow up. In answer to their typical replies he says, "Great, now I'm going to tell you how you can achieve your ambitions because to do so you've got to stay alive. And to stay alive you've got to THINK for yourself!"

"We could do with Mr Safety in the States. I will be happy to be involved should he decide to come back. His expertise should be international."