ROAD SAFETY CRUSADER IS TO DUST OFF HIS TRACKSUIT

HE was the larger-than-life character who taught thousands of children about the dangers of traffic - and now Mr Safety may make a comeback.

Dressed in a silver tracksuit, Jason Conrad spent 25 years visiting schools in the guise of Mr Safety, an expert in the rules of the Green Cross Code.

He took his "Think!" campaign around Britain and America and on the back of his success was invited to meet the Queen.

Now, 10 years after retirement, the 74-year-old said he was hoping to start delivering his message again.

Mr Conrad, who lives in Derby, said "I was the first Green Cross Code man.

"Now we're hoping to resurrect the campaign and we can only do that with the support of all those people who wondered what happened to Mr Safety."

Mr Conrad is yet to secure funding for the project or devise an action plan.

But he already knows that he will need the help of younger people to take the project into schools.

He said: "I can't be jumping around five days a week in my silver suit, although it does still fit quite well."

As an out-of-work actor, Mr Conrad launched the campaign using sponsorship and charity donations in 1973.

He said: " I was very close to witnessing a tragic accident involving a child and it had quite an impact on me.

"It was pretty serious, plus I had children of my own.

There's nothing more precious that the life of a child."

For 15 years he taught children the rules of the road through song and dance before taking his work to America for ten years.

As well as the Green Cross Code, he also promoted a blue water code and a red fire code.

He said: "I came back from America in the mid-1990s and since then I've been writing songs and thinking about the work I did.

"It's 35 years since I started the campaign so that's a reason to do something."

Mr Werbinski said: "Jason might have some imaginative ideas about how we can promote road safety." 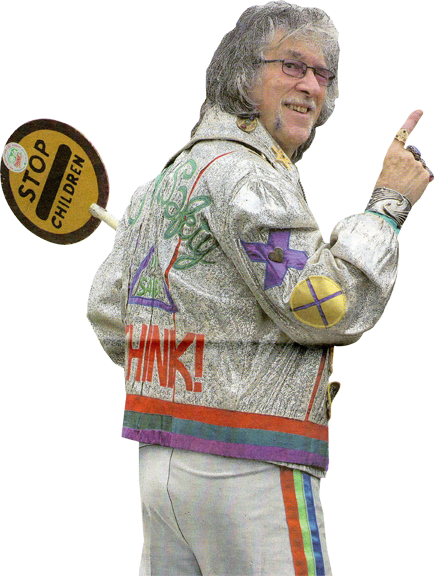 The council educates pupils aged five and six through its Child Pedestrian Training Scheme. The project lasts for several sessions and includes classroom work and a "safety walk" outside the school.

Mr Werbinski said: "We have the scheme in 30 schools where we know the need is greatest, where there's a history of accidents."

The council's Cycle Derby project also teaches children about road safety, reaching half of 10 and 11-year-olds in Derby.

"We could do with Mr Safety in the States. I will be happy to be involved should he decide to come back. His expertise should be international."