END OF THE ROAD FOR MR SAFETY

We rely on the road safety skills of savvy cartoon hedgehogs these days, but there was once a time when the biggest mover and shaker in cautionary campaigns was a man called Mr Safety. Mr Safety - aka Jason Conrad - toured the country in the 1970s and 1980s telling kids how to stay safe, to rave reviews. Decades on, and now living in Derby, he tells Simon Burch that he is now officially retiring.

JASON "Mr Safety" Conrad lifts up his shield in one movement and brings it in front of him. "Think!" he says, bringing his index finger, adorned with a large gold ring, pointing up in front of his face.

At one time, this simple movement would create mayhem. Children, sitting cross-legged in assemblies up and down the land, would mimic Mr Safety's one-word catchphrase, their own somewhat smaller fingers - and without jewellery - raised in similar pose.

But we are standing in Jason's conservatory and the word merely echoes amid the glass walls. The days when Mr Safety caused uproar in school assemblies - while simultaneously preaching a worthy road safety message - are in the dim and distant past.

Jason is 69 now and back in Derby. At the height of his fame, his hair mushroomed above his eyebrows and bubbled over towards his shoulders, which would be clad in a silver tracksuit, very much of the time.

The hair is somewhat less exuberant now, although it maintains a more than respectable presence for a man approaching hos 70th birthday. He has retained his moustache; although this, too, is more restrained, having whitened and been clipped to follow the curve of his top lip.

Despite this, and despite the addition of a pair of glasses, Jason is still recognisable. But there is one final development. Jason has an announcement to make.

This is, he says, is the end for Mr Safety. He is not gone - Jason will always be Mr Safety to his fans - but he wants to afford the country's pioneering road safety crusader the opportunity to wave a fond farewell. It is over.

Mr Safety began life when Jason witnessed a road accident involving a little boy, in 1971. An out-of-work actor - "I was, what do you call it, resting," - he started to think about what he could do. 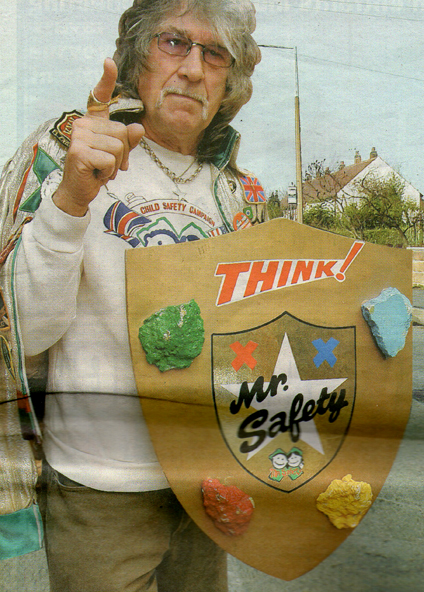 He had already been researching child safety. The accident - the boy survived - got him thinking.

Within years, he had moved to Derbyshire (to Matlock) and had developed an act with his first wife, Jill - the Jason and Jill Road Safety Show. Touring the schools from 1974, it saw them turning up with dozens of props and inviting children to dress up as lollipop ladies and policemen, all to get the safety message across.

Mr Safety had started life as a superhero called Mr Bungle - "he bungled everything. But I realised that he was wrong," Jason says. "Superheroes aren't supposed to get things wrong."

Jill soon dropped out of the shows to look after their six children and, left alone, Jason started to pare down the act, ridding himself of the props, realising he could still do good with a minimum of equipment - a shield, a silver track suit and a pointing finger.

The premise behind his campaign was simple. For the first time, he says proudly, children were being urged to think - or, sorry, Think!. It's all think this, think that, think chocolate, think exhaust pipes, nowadays," he says, "but I was the first to use it."

Another premise was that Mr Safety was just like them, but he has survived to become big and strong, to have fun and sprout a bubble perm, just because whenever a potentially tricky situation came along, he had stopped to think.

And there was his song - the New Revolution Think song, which has its own hand movements to get the message across.

"It went like this," Jason says suddenly, and with a jangling of jewellery he swiftly mimes the famous dance. A flurry of stop-look-listen gestures, it is like Steps meets the Green Cross Code Man, with lyrics on aspects of staying safe.

The dance, the get-up and the show - the Think and Stay Alive Show - worked. "People were amazed, we had so many letters," Jason says.

He worked as a personal representative to Lady Mary Soames (Winston Churchill's daughter) during International Year of the Child, in 1979, and he became vice president of the disabled charity PHAB.

He met The Queen, he rubbed shoulders with the stars and all the while continued to plough his safety furrow. His show was sponsored - "I never cost the taxpayer a penny," he says.

In 1976, he drove a Lotus Elite. At the time, he claimed it was because it was, according to RoSPA, the safest car on the road. But later he realised no-one would take a road safety campaigner who appeared to live life in the fast lane seriously and got rid of it.

"It was loaned to me and it was brilliant, but after that I had Hondas, which were nice cars and affordable," Jason says.

For the same reason, he ditched his flash Omega digital watch - as worn by President Gerald Ford and Tom Jones.

Public perception was to Jason all-important and it was for this reason that it is Dave Prowse, and not Jason Conrad, who went on to become the Green Cross Code Man, the serious super-hero skilled in the art of crossing the road.

"The agencyworking for the Government seemed hell-bent on making me a magical super-hero character,"he said. "But I said that I was already proving that you could get the message across by being a real-life super-hero with the abiltiy to think like children. I wasn't magic, I was vunerable, just like they were, and that meant I had to think, like they did.

"So I didn't do it and Dave did. But there was a lot of controversy with him because kids were expecting him to pop up when they were ready to cross the road, like he did in the adverts. People were tearing their hair out - kids were waiting for him and were getting knocked down.

"They changed it later, but we could have told them that.

"I have always believed that you can mix a little fantasy with fact, but the balance has to be right."

Undeterred by his new rival, Jason kept on trucking. Although road safety was Mr Safety's backbone, he has many a string to his bow. He could urge caution regarding fireworks or urge youngsters to think about what to do when standing near water. Wherever danger lurked, Mr Safety could be there.

In 1988, Jason took a big step. Although an avowed Anglophile, he took his act - and special sparkly bomber jacket, which, on cue, he unzips from a suit carrier - to America, setting up home in Florida and appearing in schools stateside, on TV and at Disney World. Mr Safety was hot news.

"I felt we'd done a lot here and I felt we could do a lot there. But there was a lot of rivalry over there, I would have worked with a lot of people and I did. But it was big when it could have been ginormous."

Of course, in America, Mr Safety had a couple more issues to deal with - drugs, guns and stranger danger, a new buzzword. Mr Safety has never dwelled on the specifics of what he is talking about and Jason was not about to start where guns were concerned.

It was enough, he said, to touch a colour-coded rock on his shield representing guns, tell kids to leave them alone, and move on.

This worked for 10 years until Jason - who by now had married his second wife, Brenda-Rose (he and Jill are still good friends) - decided it was time to return to Britain. Still fond of Derbyshire, he returned to the country.

Jason did think about reviving Mr Safety, but decided things had moved on in his absense. "I would be confident that I could still get up there in a big hall or exhibition centre and turn kids away from danger," he insists. "I could still hold their attention.

"I think what happens nowadays with safety is not the right way. It is taught as part of the curriculum, like you'd do with maths, like a lesson. But we are losing touch with children - there is nothing more boring than a lesson. People have said to me 'safety's boring.' And I said 'yes, it is, isn't it?"

But the opportunity did not present itselft. Instead, he is retired and is a grandad with 13 grandchildren in England and one in America - 11-year-old Emily.

He is now writing songs and so Mr Safety is calling it a day. It is 15 years since he was last spotted in action on these shores.

However, you cannot keep a good man down and, should anyone be interested, Mr Safety has an offer. He is willing to record a new version of the New Revolution Think song for any safety group that wants to harness the power of Mr Safety.

It could be the last hurrah, perhaps - but if not, Jason has one lasting message. "It takes one second to be safe or sorry," he says. "So to stay alive and safe, you must Think!"

"Mr Safety is magnificent and an inspiration. A wonderful ambassador for us all at INTERNATIONAL YEAR OF THE CHILD."