BRITAIN'S "Mr Safety" - ex-actor Jason Conrad - has a flat in Wheathampstead, another in Derby and an apartment in Stockholm. Each of them is a base for his multifarious activities for children and charities.

The Queen and other members of the Royal family have recognised his worth and rewarded him with personal words of encouragement. So have the British Safety Council and Physically Handicapped Able Bodied Association, whose certificates of merit adorn the walls of his Wheathampstead home.

"That is what I am," Jason told me. "I became a loner when my marriage broke up, but I would rather not be one. Perhaps I should give some thought to changing all that."

Jason's personal life is inextricably involved with his image as Britain's "Mr Safety". As a boy, this 44 year-old Yorkshireman wanted to be a professional footballer, but that was not to be.

His father was in the Royal Marines and the family went out with him to Malaya, where Jason served in the Malay Police.

In the late 50s, the family returned to England and Jason became a sales representative.

He told me: "I am a very simple, open, trusting person and I was a little disillusioned with business life, so I went to drama school where I was in my element. Really, I suppose, it was an escape from reality.

"I had a short but successful career as an actor, working with Shirley MacLaine, John Gregson and Anita Harris. I was with Anita in Peter Pan and I have also made appearances on film and in television.

"My whole life changed when I saw an accident in a Bristol street in which a child was killed. It preyed on my mind and I knew I had to do something positive.

"I got together a travelling road show, a kind of audience-participation pantomime, and visited schools all over the country and on the continent. I was the original Green Cross Code Man, but the media began to call me 'Mr Safety'. 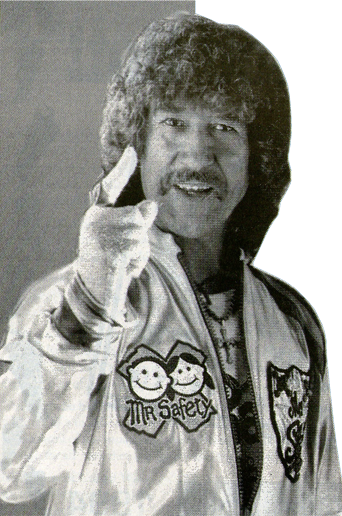 "I felt the children needed a real live hero, so I created a character called Captain Starlight - that was in Derbyshire in 1975."

Jason made only one appearance as Captain Starlight. He explained: "We decided it was the wrong image as the name seemed to conjure up magic and stunting, so I came down to earth and stuck to 'Mr Safety'.

"Then, in 1976, the press began to call me 'Britain's Mr Safety' and all over the country and in America and on the continent, I have had almost a hero's welcome."

Jason was married in 1964 and the couple had five children and one adopted child. They also fostered 14 children, from newborn babes to teenagers. The marriage ended in divorce in 1982.

Jason said: "I think our marriage failed because I became so immersed in the other me - 'Mr Safety'. That in a way, was sad."

Jason was given custody of his three youngest children, Simon, Naomi and Rebecca. The others, Robert, Alison and Amanda, had embarked on their careers.

All this happened at the height of Jason's intensive campaign as "Mr Safety" up and down the country.

"Simon, the youngest boy, is still with me and we are so close - I think one is inclined to spoil the baby of the family."

Jason talked of his encounters with Royalty - handshakes with the Queen and a 30-minute animated conversation with Princess Alexandra.

"I say it with pride because I'm a Royalist and 'true Brit' - all the nice things, you know."

For some years Jason has also devoted his energies to the charity for the physically handicapped and able bodied.

"It was the natural thing for me to do because my life has been dedicated to preventing children from landing up in wheel chairs."

He has also helped with the work of Home Farm Trust, set up to help the mentally handicapped.

"I've done shows, laughed and had fun with them and that has been a wonderful experience."

Jason touched one of his gold neck chains - the one with the cross.

"This is very personal," he said. "I am a Christian. I became one in the 60s when I was confirmed in St Albans Abbey by the Bishop, Robert Runcie, who is now Archbishop of Canterbury. Between the leaves of my bible I keep a little card recording the occasion."

With an actor's skill, Jason transformed a subject which could be dull into a thing of tinsel and glitter, with fetching costumes and arresting backgrounds - a fun show with a potent message that has reached millions of children.

He said: "As a Safety Super Star I am a hero to them, so you won't be surprised that I, too, have my own hero. He is Frankie Laine, the legendary singer.

"Frankie was working at the Bately Variety Club when I was appearing in a show in Leeds. I found myself having dinner with him and he invited me to his home in California.

"I went and it was a dream come true. We got on together because we both love children. Frankie is a super person, my house is littered with presents from him."

Jason nodded when I asked him if he was at all accident-prone.

"I've survived two serious accidents," he confided. "One was in a car when my safety belt saved me. The other was when I narrowly escaped being roasted alive in the great fire at Bingley Hall. I was asleep in my motor home and saved by my own smoke alarm."

"Mr Safety is magnificent and an inspiration. A wonderful ambassador for us all at INTERNATIONAL YEAR OF THE CHILD."