In the next year, more than 50,000 young people will die in accidents. "If a disease were killing our children in the proportion that accidents are, people would be outraged and demand this killer be stopped," said Everett Koop, former U.S. Surgeon General.

Twenty years ago, Jason Conrad, a dramatic actor and former soccer player, witnessed a tragic automobile accident that needlessly killed a child. Jason was so moved over the incident, he decided to use his acting skills and devote his future to child safety education.

A native of Yorkshire, England, the British media dubbed him "Mr. Safety" in 1975 because of his child injury prevention success. In 1978, Walt Disney Productions UK, in a world press release, was the first to acknowledge Jason as "Mr. Safety". He has appeared at over 6,000 schools and directly educated and entertained 3 million children in the United Kingdom on child safety. He originated the famous "Think and Stay Alive Shows", which include the green Cross Code for road safety, introduced the Blue Cross Code for water safety and the Red Cross Code for fire safety.

The British Safety Council has stated the roadshows are the "foremost method of child safety education in the country." Jason has made hundreds of TV appearances and radio broadcasts, been featured on the front pages of international, national, regional and local publications. His campaign has been sponsored by a number of international / national campaigns. In recognition of his accomplishments in England, Jason was presented in 1981 to Her Majesty Queen Elizabeth II.

The National Safety Council is responsible for bringing Jason and his "Mr. Safety" raod show to the United States.

The "Mr. Safety Think and Stay Alive Shows" teach children how to "Keep Informed, Defensive and Safe" (K.I.D.S.) Each child, after being taught the Mr Safety Code "Think", is deputized as a "Special Safety Agent", awarded a special safety certificate then commissioned to go out and spread the word about safety.

During his Mr. Safety tour to Florida, Jason discovered that Florida led the nation in drowning, gun, and bicycle accidents and child abductions, according to the Central Florida Safety Council. 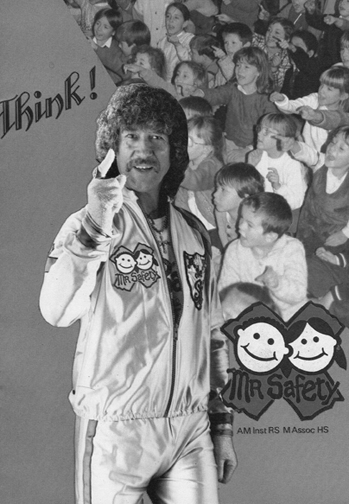 Based on those facts he chose to extend his program to the U.S. and chose Orlando as the new "World Safety Headquarters" and has created the K.I.D.S. (Keep Informed, Defensive and Safe) Foundation which works to prevent injuries to children. Jason, Through his personal appearances, has educated 250,000 children in the state of Florida alone and has added a new code which, includes guns, strangers and drugs.

"Help us to save precious life," Mr. Safety says. "It takes just one second to be safe or sorry.....so always remember the codeword 'THINK'"